I’m a true-blue theatre-goer and there’s a special place in my heart for musicals.

I’ve seen most of the local musical theatre productions this year, and this summer Vancouver has definitely had a bumper crop.

Local theatre publicist, Art of the Business blogger, and all-around social media maven Rebecca Coleman recently opined in a guest post at Musicals In Vancouver that some local productions were missing some of the spectacle of their Broadway/touring brethren.

She’s not entirely wrong.  My first introduction to the world of musical theatre was through the touring versions that periodically graced the stages of the Queen Elizabeth Theatre, the Vogue or the Ford Centre.

Those shows were brimming full of special effects and large-scale props and they definitely helped to make the shows the successes that they were.  My pre-teen eyes were amazed and won over by the sheer spectacle of it all.  The falling chandelier in Phantom of the Opera or the turntable-barricade in Les Misérables seemed to be inextricably attached to the core of those productions.

Those touring versions don’t stop by our fair city that much these days.  And that’s just fine with me.  Because, lately, they haven’t been delivering the goods in the way that they should or like they used to. 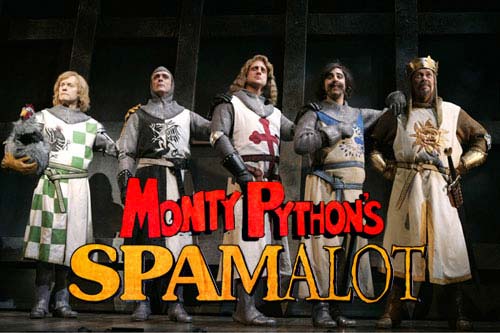 I’d like to wish that this was an anomaly, but it’s become more and more of a sad pattern.  Touring shows have become lazy, and talent and charisma are often secondary (or even tertiary).  Producers know that they can just whip out a few big-budget effects and the audience will ooh and aah in unison.

And maybe, in some places that might fly.  Thankfully, it doesn’t in Vancouver.  Our local stages are a wellspring of amazing actors, singers and dancers.  We know what talent looks like, we’ve been spoiled by it and we’re not willing to settle for anything less.

When local productions skip the flashy motorcycle entrances or the extravagant turning sets, part of me misses them desperately.  And there will always be room for critiques and hopefully improvements on the local front.  I too, found Javert’s suicide scene, in the Arts Club’s Les Misérables, to be jarringly uninspired.

But, when it comes down to it, I’d rather see local attempts than nothing at all, even if they sometimes (or completely) miss the mark.  I’ll take a good Joanne as she is, anyway I can get her (the motorcycle is optional).

When I enter the theatre, I’m happy to suspend disbelief and let my imagination fill in the holes left by the absence of multi-million dollar budgets.    Keep bringing the talent and the great performances, and I’ll be yours hook, line and sinker.

What do you think? Is better, bigger? Let me know in the comments below.

Matt DiMera is a Vancouver-based journalist and writer in his 20’s.  His current writing focuses on theatre, musicals, as well as local LGBTQ issues.  His blog is Musicals In Vancouver.