On Saturday night, I went to see The Zoo Story at Second Beach (full disclosure: Itsazoo Productions are one of my

The Zoo Story at Second Beach

We, the audience, got to sit undercover in the picnic area just above the children’s playground (red firetruck, anyone?), looking out over the playing fields and the pool. Just outside the picnic area, there was a park bench, and upon this bench, the play took place. The bench was the only set, unless you include English Bay (you could do worse), no lights, no sound (unless you count the ambient noise associated with a park near a beach), and certainly no special effects.

Stripped of all of its theatrical trappings, the production was forced to get back to basics: the words and the acting. And based on that, I’d say the show was a success–Albee’s work and its execution were both very strong.

This week, I’m gearing up to work on the upcoming Leaky Heaven Circus show, antigone undone. Bone in Her Teeth, last year’s Leaky offering, was one of my favorites of last season. It offered jaw-dropping moments of pure beauty and theatricality. For example, there was a moment at the top of act two where two people were fighting drowning. The entire scene was danced behind a wave of cling-film that stretched across the stage, and was being kept constantly in motion by others offstage. In one moment, Billy Marchenski reached up and put his fist through the cling-film, creating a perfect, captured-in-time moment. It blew my mind.

I’m a theatre junkie. Like all good junkies, I want to get as much of my drug as I can, and I crave better and better quality stuff, all the time. These two productions both satisfied me, but in very different ways. For The Zoo Story, it was about executing the basics really well, and letting that be enough. For Leaky Heaven, it was about the innovation and creativity and theatricality.

What do you think? In what proportion do you like to see pretty production values and outstanding theatricality, versus well-executed basics like script and acting? I’d love to hear. 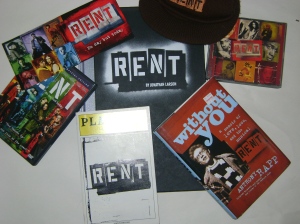 Some of the author's RENT gak

Yes, yes, you’re rolling your eyes, you’re saying “enough, already with the RENT, Rebecca. We get it. You love RENT.”

All that is certainly true, but this is a post that is only tangentially about my favorite musical. It’s more about the power of social networking (another of my favorite things).

There was this huge caffufle about RENT last week. A new version of the show, which is cleaned up a little bit, taking out the heavy swearing and explicit bits (like “Contact”) has been specially created for High Schools to produce. One high school, Corona Del Mar in California, had it scheduled as thier spring production. Coincidentally, they’ve been having a few issues with homophobia, and the choice to produce RENT was probably deliberate.

The caffufle happened when the show got cancelled. The reaons are not entirely clear why, but there is some concern that the play was deemed, even in its less-spicy state, to be, well, too spicy. Cries of ‘homophobia!’ were heard, and a bunch of the students got the word out via social networking sites like Facebook and Bloggers.

It worked. There were stories in the LA Times, the NY Times, and lots and lots of blogs.

All’s well that ends well: the show is back on.

Let this be a lesson: don’t cross the kids. They know how to mobilize.