Filed under: Business of Arts,Business relationships,Marketing with Twitter,social media — Rebecca Coleman @ 5:50 am
Tags: managing the "noise" of twitter

I did a workshop on April 17 in Richmond called Art at Work. One of the themes that kept coming up about social media, and Twitter specifically, was how “noisy” it is.

For the beginning user, Twitter can be overwhelming. You have 100s of tweets coming at you every minute, and how do you distinguish between what’s important and what’s not? While I’m a big advocate of not tweeting every thought that passes through your brain, not everyone who’s on Twitter has that attitude, so there can be a lot of dreck to wade through until you get to the good stuff.

Here’s a great graphic from Wikipedia about what’s going on on Twitter:

The top two categories: Pointless babble and Conversations, make up fully 78% of whats going on on Twitter at any given time.

Here are some tips for managing the noise: 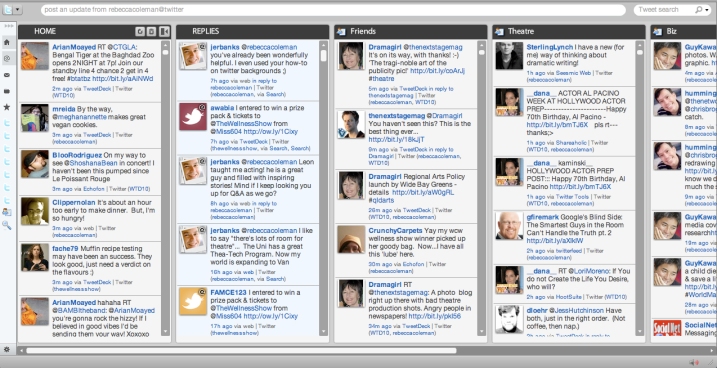 I use a Twitter platform called Seesmic Desktop. What I like about this, in addition to being able to categorize my followers, is that it has built-in link shortening, photo and video attachments, and I can manage several Twitter accounts without having to sign out and sign back in again.

But I’d encourage you to ask around, see what recommendations people have for you, and then try out some of the more popular ones yourself to see which one suits you best.

One Response to “How to manage the noise”